The GraphAware Audit Module seamlessly and transparently captures the full audit history who, when, and how a graph was modified.

What is a module?

Modules are small, custom built software packages, also commonly called plugins, that live inside of Neo4j and enhance it to provide advanced functionality. The type of advanced functionality that can be developed is unlimited, constrained only by the requirements of the business use case.

Among others, examples of modules include GraphAware products, such as:

Having covered what a module is, let’s next briefly discuss the GraphAware Framework.

The GraphAware Framework accelerates and simplifies the module development process by providing commonly needed functionality and features. Open source and publicly available on Github, many of GraphAware’s products, including each of the previously mentioned example modules and the audit module, make use of the GraphAware Framework.

GraphAware’s Audit module seamlessly and transparently keeps track of changes made to the data inside your Neo4j database. This is accomplished by capturing audit metadata in a separate graph structure within Neo4j, providing an audit trail of who, when, and how data has changed.

A demonstration of the audit module is best viewed during live interactions with Neo4j, which is why GraphAware has published this demo screencast on the GraphAware YouTube channel. While there is no substitute for seeing it live, we’ll use screenshots of the screencast here to convey the same information.

Starting with an empty Neo4j instance, let’s use Cypher to create a node:

The above Cypher statement creates a node with a label of ‘Airplane’ and a property, the number of engines this airplane has, with a value of 1.

Next, let’s query the database for all available information:

The above query returns the following graph: 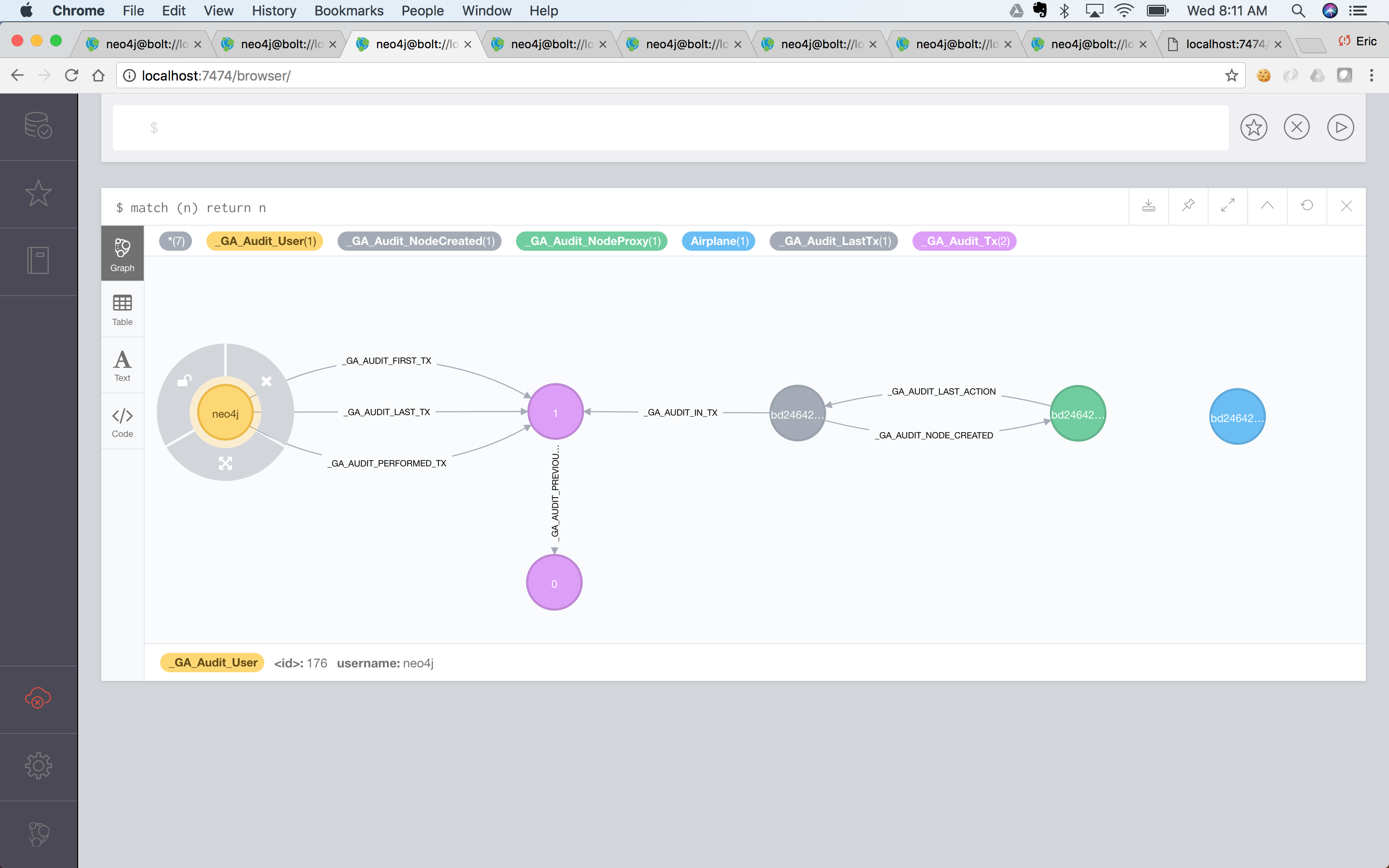 In addition to our airplane node there is quite a lot of additional data, all of it created by the audit module, with labels prefixed with _GA_Adudit. This audit module generated information includes:

Let’s continue our exploration by using Cypher to modify our newly created node:

The above Cypher statement adds a “gps” property to our airplane, setting it’s value to true. Once again querying Neo4j for all available data, we are returned the following graph: 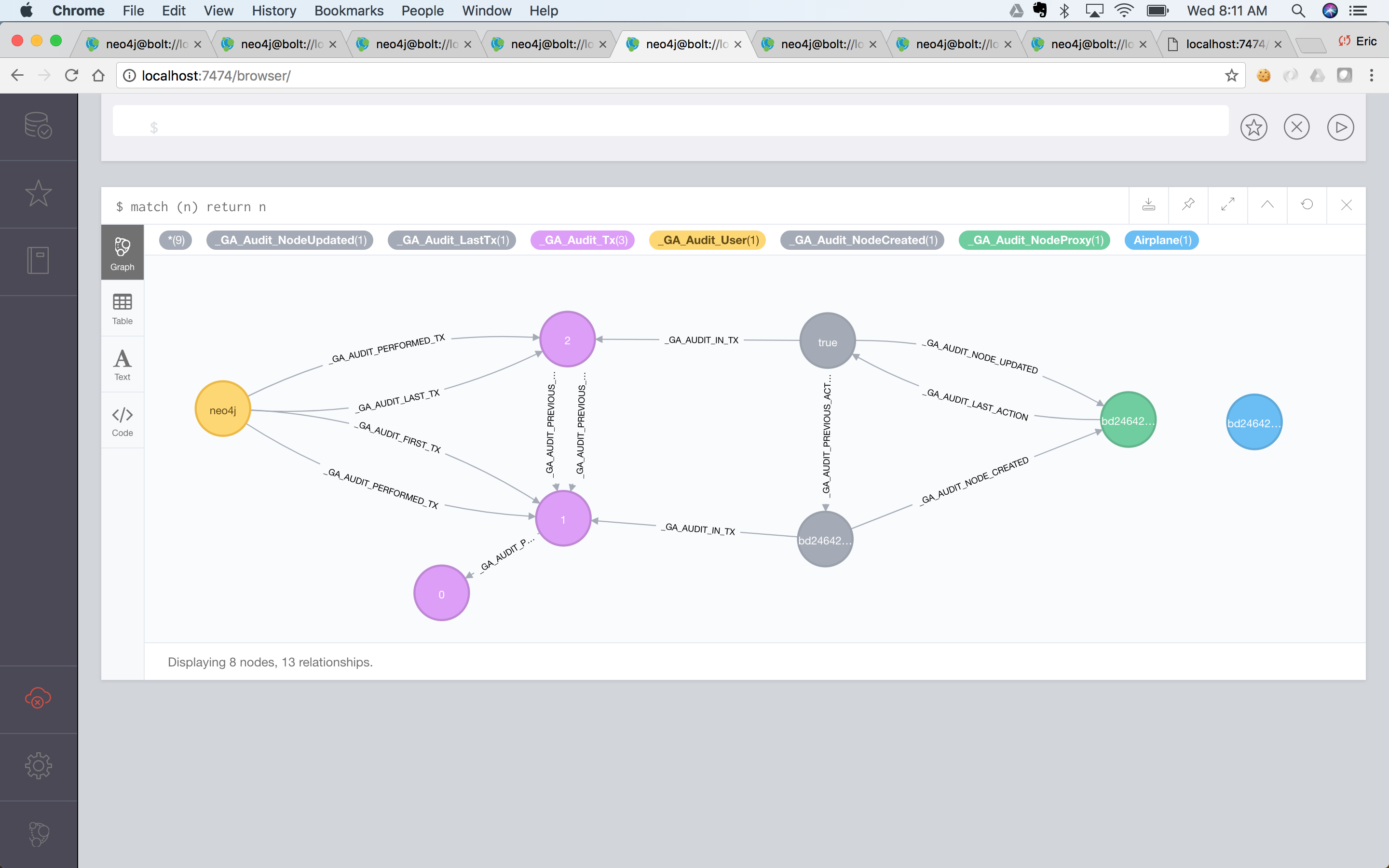 Looking at the right hand side of the graph, we once again have the blue node, representing our airplane, which now has a gps property. We also see:

Next, let’s walk through what happens when a node’s property is removed, such as by removing our airplane’s gps property.

Once again querying Neo4j for all available data, we are returned the following graph: 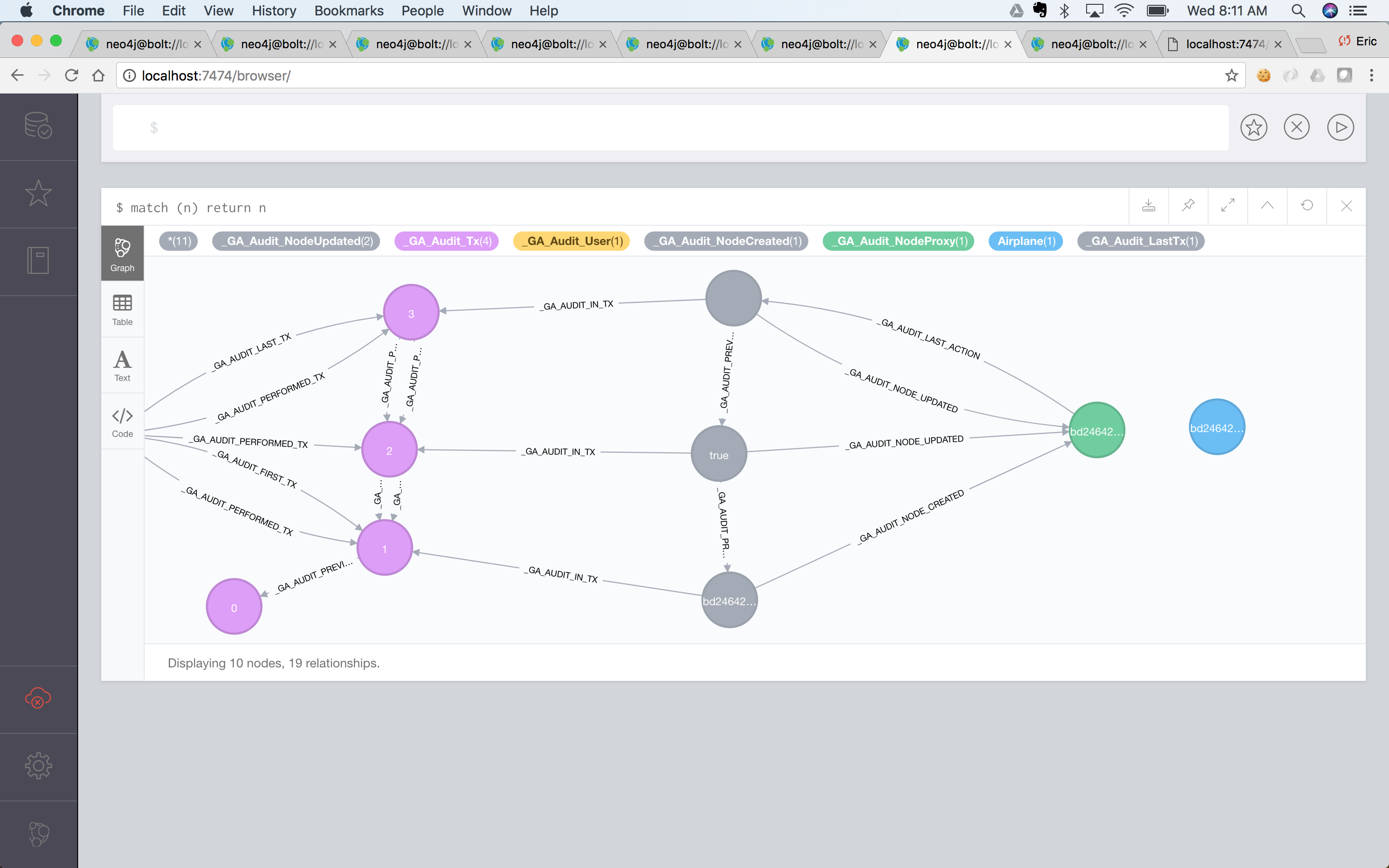 Looking at Figure 3, the graph once again looks quite different. Following the pattern from previous exploration, we see an additional set of purple and gray nodes and relationships that correspond to the execution of another transaction. From this graph we see:

The capture of this audit information is very powerful and can be access in three ways:

The first option, querying the database, is a standard exercise in using Cypher. The audit subgraph provides many convenient relationships, such as _GA_AUDIT_LAST_ACTION or _GA_AUDIT_PREVIOUS_TRANSACTION, that make it easy to traverse the full audit history.

The second option, using a Cypher function provided by the module, allows you obtain the audit metadata in JSON format through simple Cypher statements without having to have firsthand knowledge of the audit subgraph structure. A function example, including pagination arguments, is:

The execution of this query returns the following results: 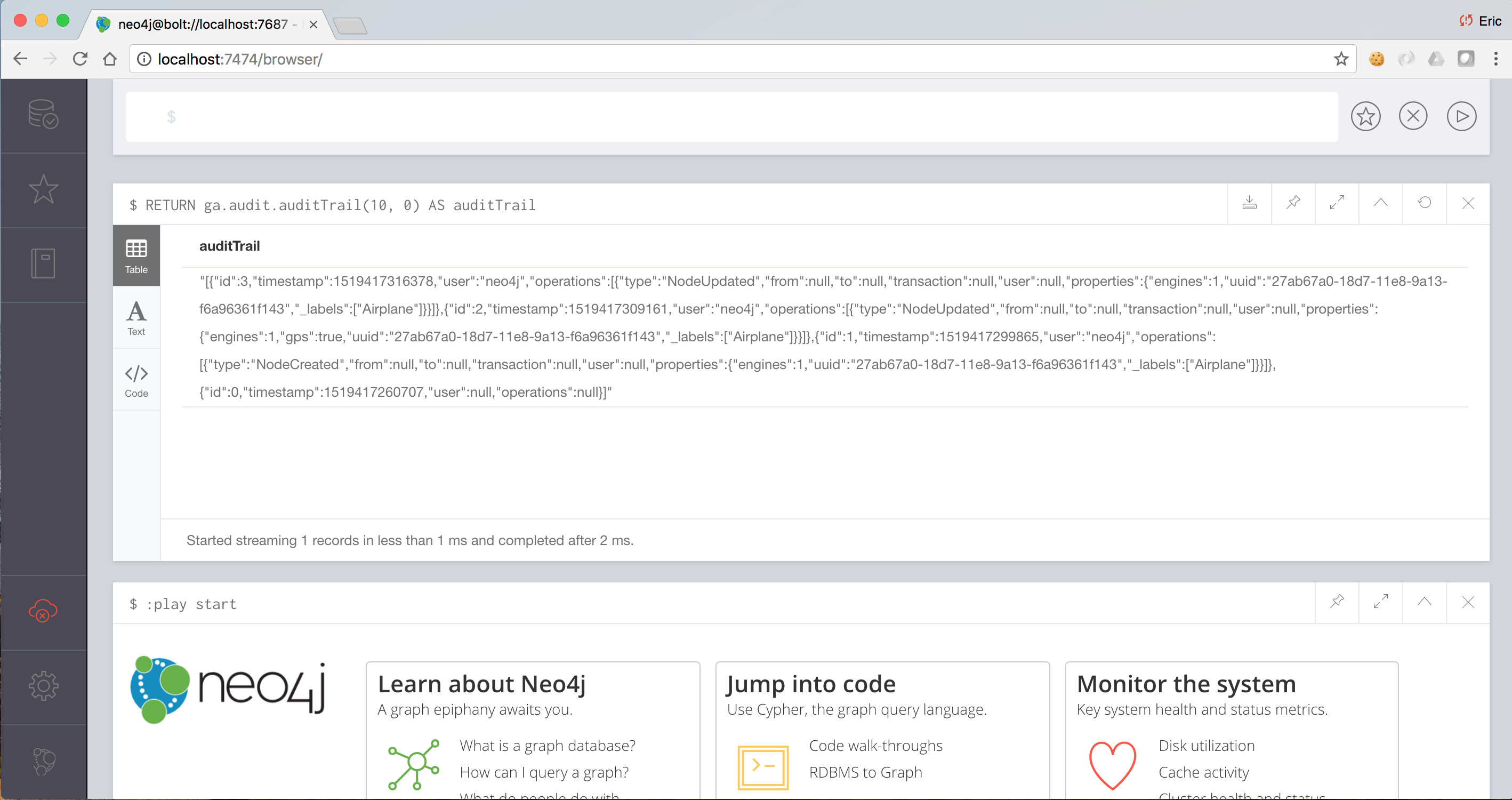 Finally, the audit module also provides a convenient REST API which offers many capabilities, including the retrieval of audit data for a specific node or relationship by its UUID. Using any REST client, such as a web browser, and providing the same credentials used to access the Neo4j Browser, the audit data in JSON format can be seen below. 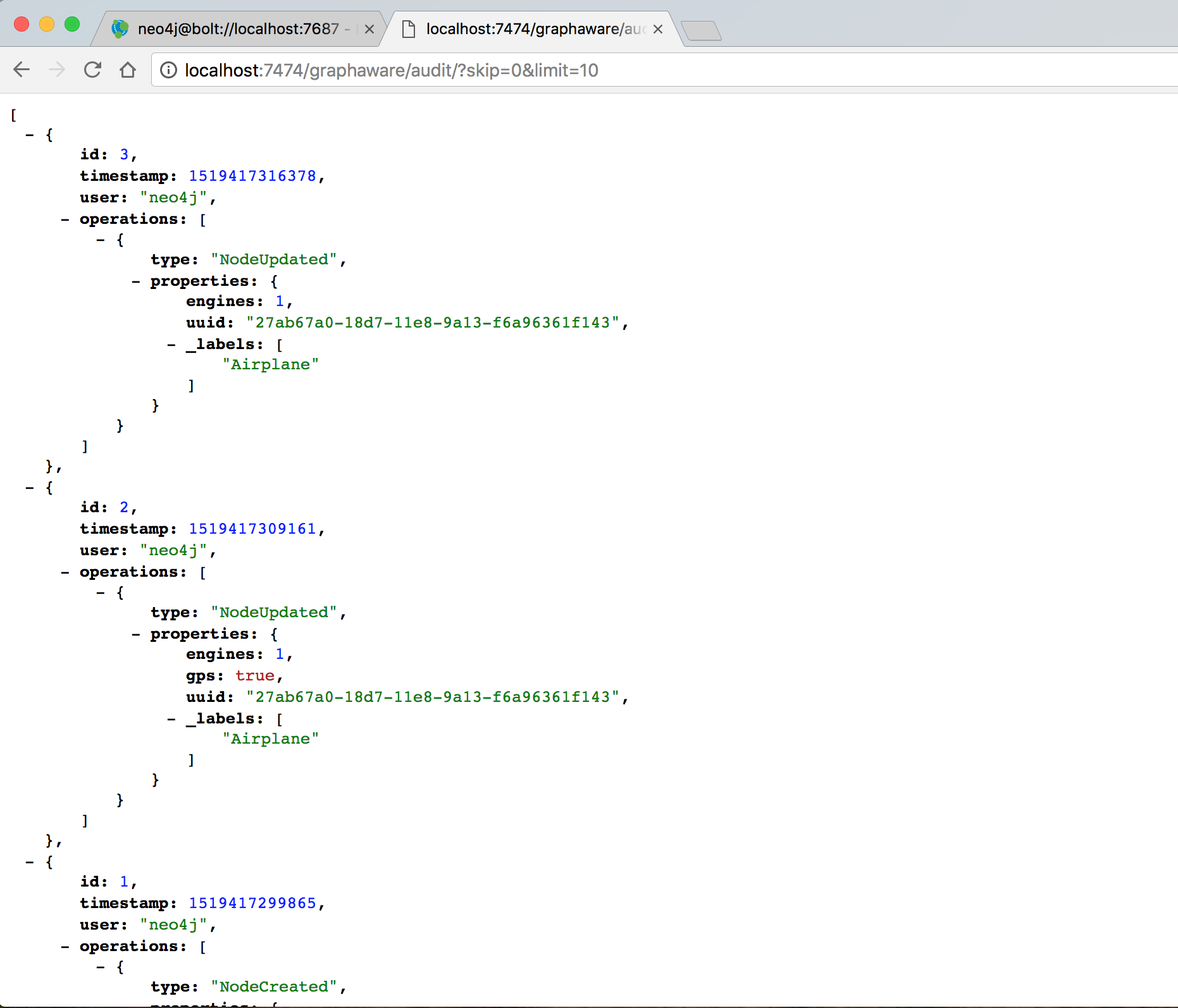 Getting the Audit Module

The audit module is available from GraphAware under a commercial license, which includes 24x7 email and phone support, a guaranteed SLA, and new feature requests implemented with high priority. Please contact GraphAware for pricing customized to your specific use case.

In conclusion, Modules are plugins that live inside Neo4j, providing advanced functionality.

The GraphAware Audit Module seamlessly and transparently captures the full audit history of who, when, and how a graph was modified. This audit information is fully available through traditional Cypher queries, a Cypher function, or through the provided REST API.