Until now, Neo4j users wanting to import data into Neo4j have been faced with two choices: Create Cypher statements in conjunction with Cypher’s LOAD CSV or use Neo4j’s batch import tool.

Each of these approaches has its strengths and weaknesses. LOAD CSV is very flexible, but you need to learn Cypher, it struggles with large volumes of data and is relatively slow.

On the other hand, Neo4j’s batch import tool is extremely efficient at processing large data volumes. You don’t need to know any Cypher, but the input files usually need to be manually generated beforehand. Being a simple CSV loader, it also lacks the expressive power of Cypher.

Furthermore, many of the issues faced by any reasonably complex data import process can’t easily be solved using the existing tooling. Consequently, people often resort to creating bespoke solutions in code. We know, because we’ve done it enough times ourselves.

At GraphAware, we didn’t want to keep re-inventing the wheel at every new client we went to. So we took a different approach and built Databridge. Databridge is a fully-featured ETL tool specifically built for Neo4j, and designed for usability, expressive power and impressive performance. It’s already in use at a number of GraphAware clients, and we think it’s now mature enough to bring it to the attention of the wider world.

So, in this blog post, we’re going to take a quick tour of the main features of Databridge, to give you an idea of what it can do, and to help you get a feel for whether it would be useful for you.

We’ll create a really simple example that you can follow along with as we go.

One of the difficulties with the current ETL tools is that they are quite developer-oriented. You either have to learn a lot of Cypher, or you have to be able to manipulate your raw data sources and generate node and relationship files that the batch import tool can use. As noted earlier, when these two options become infeasible, you need to write code.

But in fact, every Neo4j import needs to do exactly the same sorts of things: locate the data sources, know how to transform them into graph objects, link nodes together with relationships, assign labels, index properties and so on. All this pretty much boils down to two questions:

Databridge tackles these questions by being primarily declarative, instead of programmatic in nature.

If you can create a JSON document, you can use Databridge.

In this example, we have some satellite data in a CSV file:

This data contains the following columns: 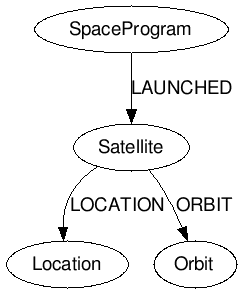 As you can see, the nodes section creates a definition for each type of node we want in the graph. The columns from each row of data in the CSV file will be automatically mapped by Databridge to the properties of the node types we have defined.

Now that we’ve defined the schema describing how we would like to map the CSV data to the various nodes, edges, labels and properties in the graph, we need to tell Databridge where to find the satellites data. This is the purpose of resource descriptors.

More often than not, an import will consist of many interlinking schemas and their associated resource definitions, so we need a way to bring them all together when we run the import. The schema control file (called schema.json) is where we do this. It’s a simple JSON file where we enumerate the schema definitions we want to include in the import, and the order we want to include them:

That’s it. Now, we can run the import. To do that, we’ll use Databridge’s command-line shell.

This will run the import as a foreground task, so you will be able to observe its progress on the console. It should only take a second or so.

Databridge creates a completely new graph database, separate from any other that Neo4j is using, so you can’t corrupt or overwrite your existing graph database. If your Neo4j server is running on the same machine as Databridge, you can then use the shell to switch it to use the new database the import has just created:

Finally, open the Neo4j Browser and explore your new graph!

Databridge Is Not Just for CSV

Although our example above used a CSV data source, Databridge is able to simultaneously consume different kinds of tabular data during an import:

Note: Text-based resources can also be fetched over a network (using HTTPS, SFTP, SSH etc), so you don’t have to move your data files around if you don’t want to.

Note: Databridge can also autoconfigure an import from any JDBC datasource by examining the database schema and automatically generating the appropriate Databridge schema and resource definitions for you.

Databridge Is Not Just for Tabular Data Either

Databridge also provides adapters for a number of non-tabular data resources with well-known formats. These include:

If none of these fit the bill, you can easily build and deploy your own adapter, thanks to Databridge’s plugin architecture and simple Adapter API. Or ask us to help!

A fully-featured Expression Language lets you define which graph elements should be included or excluded while your data is being imported. You can define filters for nodes, labels, properties and relationships as well as supply default values for any missing properties.

You can compose data for a single node from different data sources. For example, you could create a common view of a Customer node in the graph by combining relevant information from a Sales database along with a CSV export from a Marketing database.

CSV extracts and SQL queries that join tables often contain duplicate data. Databridge gives you total control over how you handle such duplicates by allowing you to specify update strategies for the different node types encountered during the import:

Databridge supports a wide variety of data converters, including:

And of course, if you can’t find the data converter you need, you can create a plugin to do it for you, using the Plugin API.

Databridge works with all versions of Neo4j from 2.0 onwards.

Databridge uses state-of-the art off-heap data structures to relieve JVM Garbage Collection pressure during the import. As a result, throughput scales linearly to hundreds of millions of nodes and edges, and it is quite easy to achieve import speeds of over 1 million graph objects per second on fairly ordinary hardware.

Databridge works on all Debian-based and RPM/RHEL-based Linux systems, as well as Mac OS X.

There is currently no native support for Windows (we’re working on it!), but in the meantime, if you are on a Windows platform, you can install a guest VM of one of the supported platforms and run Databridge inside the VM, or you can install a Bash emulator like Cygwin or MingW32.

We firmly believe that Databridge represents a step change when it comes to data import for Neo4j. It’s been tried and tested in the field with a number of our own clients, and we’re confident it is suitable not just for SMEs but also for much larger enterprises.

We’ll be following up this introductory post with some in-depth tutorials very soon, where we’ll put Databridge through its paces, but in the meantime if you’re interested in Databridge, if you’d like a demo, or you want to discuss your data import problems with us, why not get in touch at databridge@graphaware.com?